Robbie the Reindeer: Legend of the Lost Tribe (2002)

Watch Robbie the Reindeer: Legend of the Lost Tribe (2002) full episodes online free watchcartoononline.
Synopsis: Some time has passed since the race in “Robbie The Reindeer” and the group of reindeers have set up a tourist business offering guided tours. When an accident occurs on one such tour Robbie believes he was saved by a long lost tribe of Vikings – supposed to have been wiped out years ago. No one believes him and they are more concerned with the business losing money. When the evil Blitzen is released from prison 50 years early he promises to help them turn things around but double crosses them with the help of a master of disguise rabbit. Robbie escapes and goes to the Viking tribe to help him and his friends overcome Blitzen. 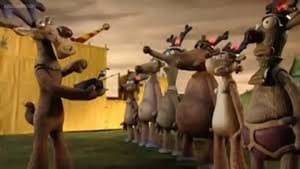